The company arranges lectures and excursions around medical historical themes and contributes to the publication of books on illness and health from a historical perspective.

1874: Lectures about the History of Medicine

In 1874, Julius Petersen (1840-1912), who was a general practitioner, began to give lectures about the History of Medicine at the University of Copenhagen, and in 1876 he released the book Hovedmomenter i den medicinske Lægekunsts historiske Udvikling. This book and Petersen’s later works portrayed the interplay between leading figures and ideas in Danish and European medicine, especially from the 16th into the 19th century. The book was translated into German.

1893: Professor in the History of Medicine

In 1893, he became the very first Professor of History of Medicine at the University of Copenhagen. Petersen expressed the hope that his writings on the History of Medicine would help ordinary doctors to search for improvement in the (clinical) practice of medicine. On his 70th birthday eight of his disciples composed a Festschrift. 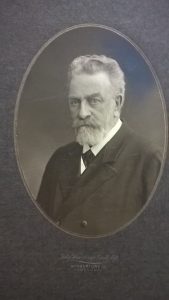 In 1907, at the 50 year Anniversary event of the the Danish Medical Union, an exhibition of medical artifacts was arranged. Carl Julius Salomonsen, Denmark’s first bacteriologist, and two of Julius Petersen’s disciples were the promoters. They asked members of the medical and related professions to donate artefacts.

After the exhibition, the objects were stored in Salomonsen’s Institute of Bacteriology. This was the beginning of the Medical History Museum of the University of Copenhagen (now: Medical Museion), which after many troubles got its present domicile in the old Academy of Surgery in 1946.

1917: The Danish Society for the History of Medicine (DMHS)

1917 marked a milestone in the Nordic History of Medicine. Sweden has had its Society for quite some time already, while Denmark, Norway, and Finland all formed similar societies this very year.

On Monday 22 October 1917 at 8 PM, DMHS arranged its first meeting of the Medical Society’s premises (the Student Association’s building). Prof. dr. phil. in archaeology Christian Blinkenberg gave an initial presentation on “Helenekilde in the light of changing times”, and Prof. dr. med. in pathology Carl Julius Salomonsen reported on “A typhoid card”.

The latter mentioned was – together with Thorvald Madsen – one of the initiators of the creation of Statens Serum Institut (SSI). All interested (with accompanying ladies) were welcomed. 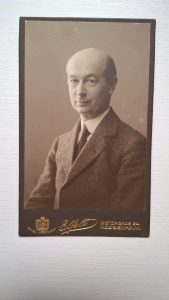 Accordingly, Carl Julius Salomonsen, who turned 70 on 6 December 1917, was praised and celebrated as Chairman in a Danish Medical Journal editorial.

Its objective was to gather all those interested in the historical aspects of medicine and related sciences, and its raison d’être was to serve as an organisational vehicle for a variety of medical-related topics and studies, and to offer a practical platform for sharing and dissemination of knowledge.

Intermittently, close connections have existed between DMHS, Medical Museion and the Professor in the History of Medicine.

Six lectures and excursions have been arranged almost every year consecutively since 1917. Medical Museion in Copenhagen has kindly provided DMHS with facilities and the Auditorium in the old Academy of Surgery for the lectures for many years.

DMHS has supported the edition of numerous books and publications financially, and assisted with distribution.

DMHS wished to collaborate with similar Societies in the other Nordic countries from the very beginning. A Nordic Medical History Congress has been arranged every second year since 1967 − four times in Denmark. In May 2019, we will meet in Copenhagen once again.

In 1971-72, two sister-societies for the History of Medicine were founded in Denmark, for Funen and Jutland respectively. These Societies have ever since co-edited the Dansk Medicinhistorisk Årbog (Danish Medical History Yearbook), indexed by Medline.

A Selection of Outstanding DMHS Chairmen 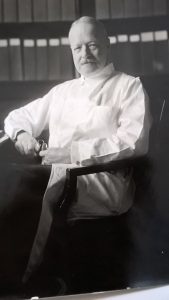 Examples of some outstanding DMHS Chairmen or members of the Executive Board Committee:

This website uses cookies to improve your experience while you navigate through the website. Out of these cookies, the cookies that are categorized as necessary are stored on your browser as they are essential for the working of basic functionalities of the website. We also use third-party cookies that help us analyze and understand how you use this website. These cookies will be stored in your browser only with your consent. You also have the option to opt-out of these cookies. But opting out of some of these cookies may have an effect on your browsing experience.
Necessary Altid aktiveret
Necessary cookies are absolutely essential for the website to function properly. This category only includes cookies that ensures basic functionalities and security features of the website. These cookies do not store any personal information.
Non-necessary
Any cookies that may not be particularly necessary for the website to function and is used specifically to collect user personal data via analytics, ads, other embedded contents are termed as non-necessary cookies. It is mandatory to procure user consent prior to running these cookies on your website.
GEM & ACCEPTÈR